Force, or Coerce Into Sex depending on translations, is of using vulgar words to push a character to have sex. It normally ends up with angering NPC and the success chance is set to 0%; unless exact conditions are met. It cannot be forced into sex without opponent's agreement.

Given that condition, Forced H is counted as consensual sex to others; NPCs react as usual when they spotted, and consider it as cheating if one of them is a lover.

Whether successful or not, forcing a character will always increase the Hate points unless the said character has the "Masochist" trait.

Once first Forced H is done, the success chance of

Follow Me interactions will be permanently set to +100%. Special statuses will be displayed in Jizou screen after that, indicating the bully/victim relationship. This can be nullified by increasing Love points. 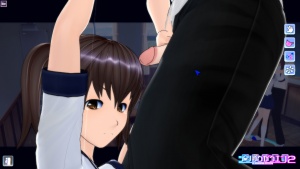 Characters with high affection to PC

NPCs who have high affection towards the PC can also be engaged into Forced H. To engage, the NPC must also have had H with the PC at least once. This bypasses negative factor such as virtues, risky day, Faithful/Singleminded trait, boy/girlfriend exist and opposite sexual orientation. During H scene, the opponent NPC will show reluctant manner but give positive comments in climax poses and after sex as usual.

Impregnation chance is twice the one present in consensual H. Generally, only a couple of ejaculations inside in a same week can impregnate a female character during risky days. This may lead to your expulsion from the the school on next Monday.