Each Time period is 20 real-time minutes long by default. This can be adjusted in the configuration menu. Interactions initated by the PC or NPCs(towards the PC) consume Time. NPC-to-NPC interactions do not cost time. Time also passes during H scenes. Switching H positions consumes time; Better H-Compatibility reduces this time-loss. Time Periods can not end during H scenes.

This is school attendance period. When the PC arrives at the station, some NPCs may already be in their club rooms while others will begin to arrive at the station individually. Characters who are not present will show a

icon in the class roster screen.

Unless you skipped the class, finishing this period will lead to classes which increase Intelligence. 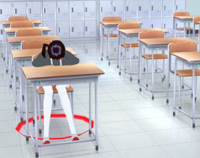 A lunch-break before the physical class starts. Characters can invite and be invited to eat lunch together on the campus. Lowest sociability NPCs may be asleep on their desks as of the v11 update, in which case they cannot interact or be interacted with during the entire time period.

Finishing this period will lead to physical classes which increase Strength. Class types vary by weekday and the PC will start from differing locations at the start of the next period.

This is free time before clubs session start. In the meantime characters can invite and be invited to have a snack or tea break in the Courtyard.

Finishing this period will lead to club session which increases stats depending on club location. 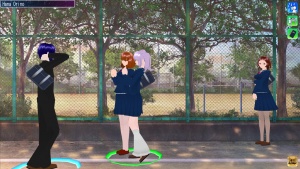 competition on going together 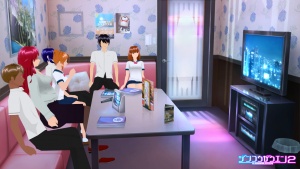 This is free time after school and uses sunset lighting. Characters start going home at this time. Characters with the Daydreamer/Absentminded trait have a higher chance to leave earlier. Lovers are likely to stay longer while teachers will never leave before every student, including the PC, left. Since school time is over, characters can invite/be invited to Have Some Fun/Go Eat/Go to Karaoke without missing a class.

This will conclude the day and lead to the night time bedroom, giving you the option to save your game. Sleeping will begin the next day.

Since it has no physical classes, Saturday only has three time periods which exclude Afternoon. Every two weeks there's a examination which will take place at the end of the first session on Saturday.The Examination takes the whole day and directly skips from the Morning to the Evening period.

Sunday is off-day and consists of only two periods, Morning and Evening. As PC arriving in the morning, the station is crowded with NPCs wandering and others will arrive soon. During Morning, any attempt to invite NPC for station activities, such as karaoke and restaurant, will fail automatically.

Sunday Evening NPCs will start going home or hang around for a while. Evening interactions such as studying at home or hanging around at the station work as usual.

If you have a date with an NPC, it will begin as soon as you interact with the character. The characters may also approach you to start the date. Delaying the start of the date for longer periods of time will reduce their mood, and catching you talking to another character may put them in a bad mood. The result of date will be shown at the end, which concludes the Morning period. A date has only two outcomes, depending on the character's opinion toward PC.