By default, when you press the Open menu / Cancel button, you get a choice between Normal Menu and Special Menu.

Later on, you can change the method of accessing Special Menu via Girls Secret Diary (Options → Special menu settings)

The Normal Menu is the normal RPGmaker game menu. It is completely translated and self-explanatory;

The special menu is only partially translated. 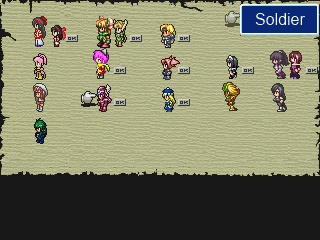 This is where you select your character. Move the hand cursor around with ← ↑ → ↓. Selecting a character with the Confirm/Interact key (Z/Enter/Space) will allow you to see what their names and descriptions are. If you do not wish to select that character then you can cancel the option with the Cancel key (X/C/Esc/V/B/N).

They characters are split into 4 playable classes; Soldier, Magic, Hybrid and Other. Selecting the big blue box shows other classes. See the characters page for a more in-depth guide.

At the start of the game you are taken straight to the character selection menu. The right hand corner displays the classes of which those champions you see here, by clicking on it, it will change class screens and will display more characters in a different role.

Note: Characters without the little box labeled "OK" next to them do not have portrait pictures.

Once you have finished selecting your desirable character, you will be then given a number of choices. You can change most of these settings later on via debug mode in game.

Some character also have extra questions in addition to these standard questions, such as multiple portrait choices.

Normal or Easy mode are recommended for new players.

Without save snywhere on, you can only save in inns or with a special item.

This setting controls whether your standing portait is visible or not.

What type of girl do you prefer?

Pick how sexual your character is.

Determine the increase in sensitivity points

Sets the sensitivity of your character's erogenous zones.

Refer to H abilities page for an explanation of the sensitivity points.

Many characters will begin with adjustments to various body weakness points over and above the base amount that the Girl's type adds.

Do you want to see the controls / display?

Better skip it, you can check the details right here on this page.

There is no need to start a new game to switch character as you can play multiple characters in one save. Enter the Ray-On Village inn and go to the second door on the right. The first option will allow you to switch characters. Other locations in the game such as the player's house in Capital City Avalon also allow for character changes.

Note: Unconscious girls will remain unplayable until they're rescued.

The game doesn't always end when your health drops to 0. Instead your character will faint and you'll be given two options: Switch Character or Quit. If you switch, your unconscious character will be left on or near the same map. Unrescued characters will be grayed out, and will remain unplayable until rescued. To rescue a girl, simply walk into them to pick them up. Next, return to the RAY-ON village inn and talk to the clerk. Now when you switch characters, the girl will now be selectable.

Be quick! As time goes on, all unconscious characters will slowly lose experience. If a character is reduced to 0 experience, they'll be captured and put on the slave market, where you'll have to pay to get them back. The character you choose for the rescue will inherit all items and cash, however they will remain at the level you last left them. Therefore, it's recommended to train at least two characters equally. If the character in need of rescuing has been enslaved and what-not, their equipped items will still be on them.