Full list of controls -- More detailed descriptions are given in Battle and H-mode sections.

In this mode, you can adventure with your chosen character on a series of quests and challenges through different environments, building experience and gaining gold. You can choose your adventurer from any of the pre-made characters, or custom characters made in the character editor or imported from Tamzone.

Main: There are two main campaigns one for Eir and one for Rota, each featuring 5 missions in addition to the quests and rival fights. They also have individual scenes with rivals they encounter.

Adventurer status is saved separately from the allpack, so editing a character in Tamtam will have no effect on that character's campaign progress.

Entering campaign mode places your character in Rothschild square, where you can wander safely. Only the two red rings can be interacted with; one over a rug displaying merchandise, where new weapons can be purchased, and one at the path leading into the wilderness, where Quests can be embarked from.

The Character Menu displays current stats and inventory, and weapons and magics can be equipped. Menu buttons are arranged in this order:

HP and MP both increase at fixed amounts per level. Power, a hidden stat, also increases the same way, and multiplies damage done by both weapons and magic.

Magic: Five magic attacks are available from the start, one of each type: Fire, Ice, Shortbeam, Longbeam and Homing Beam. To use them in battle, they have to be equipped to one (or all) of the three available slots by left-clicking and dragging them into each. These can be re-arranged from this Menu at any time in wandering or battle modes. Casting in Battle is explained in the Battle mode section.

On reaching level 20, upgraded versions of each magic attack become available, and a Hyperspeed move that accelerates movement rate in brief bursts.

Weapons: Here the collection of weapons unlocked can be viewed and equipped. Any weapons saved to the character's outfit will be available for all characters, as will any weapons purchased from the weapons market.

Weapons can be individually equipped to right (main weapon) or left (sub weapon) hands. All weapons have different properties depending on whether they're single-wielded or dual-wielded in right or left hands, and some have more unique abilities.

The last two buttons Return to game and Return to Title Menu.

The Training Ground and Chapter 1 are available to all characters at the start. Completing each Chapter in the series unlocks the next one for all characters.

All Rival Quests are available to all players from the beginning. Each has a Level 25 difficulty and a reward of 5000 Money.

Every default character is equipped with only melee weapons although Ichigo can throw her chakram.

Eir and Rota have individual story quests available to them. Completing each part unlocks the next for all future playthroughs.

Battles consist of waves of monsters that the player must fight, followed by a large boss. Rival battles will proceed to the 1-1 character fight after the boss is defeated.

The first bar represents your Health, which is only replenished when you level up.

The second bar represents your Magic Points and replenishes automatically.

The third bar represents your balance. If you get hit enough times you will lose your balance and fall. After you get up you will be unable to take damage for a while, represented by a blue aura surrounding your character.

Melee attacks can hit multiple enemies and are more effective against monsters since they cannot block them. Clicking the mouse button(s) produces up to 5 attacks and clicking while sprinting produces an unblockable attack. This applies to every melee weapon. If you dual-wield two melee weapons, clicking both mouse buttons in quick succession will produce a flurry.

Each weapon will fire where the center of the screen is and you will see the crosshair for that brief moment. Ranged attacks become more effective the closer the target is. Different weapons fire in different ways. 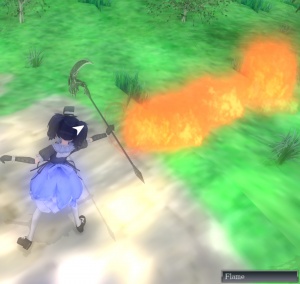 During every battle you will only be able to use 3 preset magic attacks. Each magic attack consumes Magic Points, which constantly regenerate.

FlameLv2 surrounds your character with fire, damaging any adjacent enemy

HomingBeamLv2 fires many rays of light that converge on the targeted enemy, with a few of them surrounding your character for defense

Hyperspeed uses Magic Points to make a large dash. During this brief period all attacks will pass through you, including magic attacks, but your attacks will also miss until you decelerate to normal speed.

In addition, most quests feature a large boss. Some are larger versions of the aforementioned monsters while others are unique.

The succubus are monster opponents who move, attack and defend as human characters. They share the tactics and threat level equal level Rivals, but they frequently spawn in packs. The giant succubus moves and attacks similar to other giant monster. 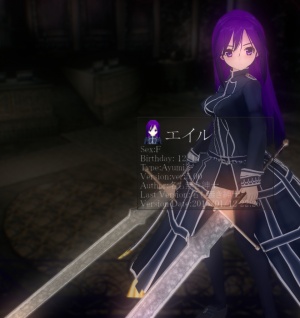 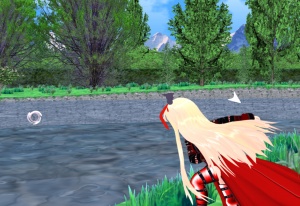 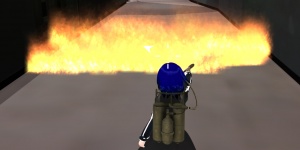 2handed melee weapons will act as a 1handed one if dual-weld with another melee or ranged weapon.

If your only weapon is a ranged one you can use your other hand to aim.

If your only weapon is one chakram you can throw it by attacking with the other hand.

Firing the flamethrower at the ground will start a fire which lasts for a few seconds, dealing damage to any enemy that passes through. You can safely pass through the fire though.

Accessible from the title screen, this mode is used to pit up to five characters against each other on any map. Every character will use it's default weapon and the Flame, Ice and ShortBeam magic attacks and will have instant Magic Points regeneration. You can also set up teams. Non-boss monsters can be added too but since you can only add up to four they are too weak to prove a challenge even on the hardest difficulty.