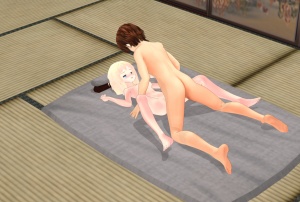 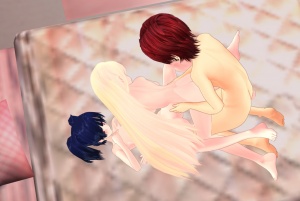 In Campaign Mode, each Heroine enters an Intimate H-scene at the end of their quest. Defeat in campaign mode presents the option to engage in a Rough, post-battle H scene with the vanquisher.

H is freely available by choosing the "Free H" option from the title screen, in which you can select between Intimate or Rough H scenarios. The girl will have different animations, and very different dialog, in either scenario type.

The animations are made in such a way that the first character must be the girl while the others must be males or futa. This mode has only three poses. 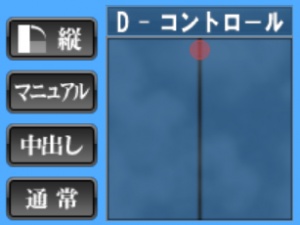 The D Control pad is used manually to move the active character. Moving the pointer along the red line pushes while moving on the opposite axis grinds. Right-drag within the pad grinds in a continuous motion. If the penis size is long enough, pushing all the way to the end of the red line causes the girl to convulse from pressing against her cervix.

In all scenarios there are only two Ecstasy bars. The blue bar corresponds to the guy/futa/monster while the red bar corresponds to the girl. Moving the pad pointer in only two directions increases the blue bar faster while moving it in circles increases the red bar faster. The corresponding character(s) will automatically Climax when its bar is full. If both bars are very close then the characters will Simultaneously Climax at the same time, otherwise the other bar will stop until their Climax is finished.

If external Ejaculation is selected, when the blue bar fills the male character will withdraw and the view will switch to 1st person. Pressing Space will spray white fluid approximately around the center of viewpoint, which mouse movement can direct. There is no limit to the amount of semen that can be sprayed. Ejaculation mode is exited with Right-Click.