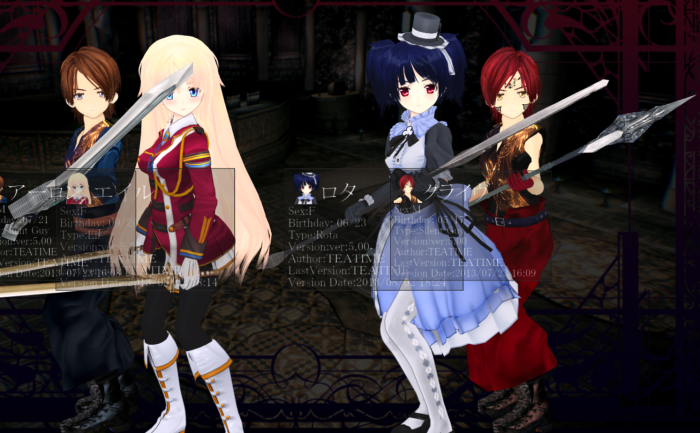 A soldier belonging to an ancient house of martial artists charged with the duty of defending Rothschild and preserving ancestral arts of war, Eir is the heir of secret traditions handed down over generations. Brought up under the training of her father, a master swordsman, Eir seldom had the opportunity to show her skills, as the most dangerous threat to her village were the rare wild animals wandering into the village. Four years before the events of the game, Eir took part in the Tournament of Valor and made it to the finals, where she met Aaron but was defeated by him. When the demon horde invaded, Eir eventually became unable to defend the village on her own. Among the warriors that came to aid the village was Aaron. Eventually she grew close to her former rival, Aaron becoming the only man she trusted. After Aaron is captured she sets out to rescue him.

As a descendant of Rothschild's sole clan of sorcerers, Rota has been raised with great knowledge and craft of magic. Her family arranged for her to marry Clive despite his initial lack of interest. Rota grew attracted to Clive, becoming contrived to meet with him and eventually calling him "Clive-Sama" (Master Clive). After Clive leaves to fight the source of the demon incursion, an ancient devil, Rota defies her family's orders and leaves to find him, having the ability to follow Clive's smell.

Aaron is the youngest stalwart warrior called to Rothschild to defeat the demon horde and Eir's love interest. Four years before the events of the game he took part in the Tournament of Valor and defeated Eir in the finals, winning the championship. During his stay in Rothschild he grew close to Eir, eventually becoming the only man she trusted. He was part of the first demon hunting party but asked Eir not to take part in the raid out of concern for her. When the party was attacked by an ancient devil Aaron survived but was captured by the demons and put under a curse.

Clive is a descendant of a prestigious clan of sorcerers from the East and Rota's love interest. Because Clive disliked the custom of arranged marriages, he shown no interest in Rota. When the demon horde invaded, Clive left on his own to fight the source of the demons - an ancient devil.

These characters return in LoveDeath Final! as rivals: