This game is basically just a sandbox that takes most of its direction from 3D Custom Girl and Artificial Girl 3. There isn't much to do at the moment since it is still very new and not a lot of mods exist.

You can basically run around with the main girl and have sex with her and the NPC's. You can change their body types and clothes freely. The NPC's scripts are very plain as all they can currently do are appear and disappear at certain times of the day. They can also follow you around the map, but they will always remain in their maps. The main girl has a hard set routine that she follows if you leave her alone.

Another feature that is available is a model poser that is accessed by pressing the "Residents" button. You can add customizable models to a map and pose or apply motion data to them.

People are looking into how to mod this game, so there will be more to do as updates come out and more mods are created or converted from 3D Custom Girl. 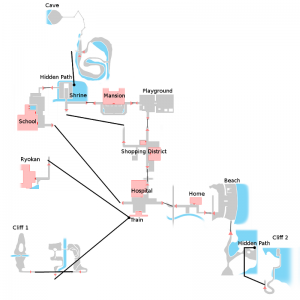