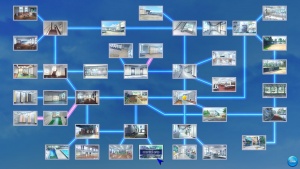 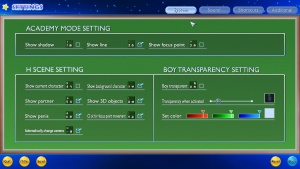 All of the options on the System tab have hotkeys to toggle them, shown here and on the Shortcuts tab along with other controls. Many of these are self-explanatory.

Starting with update v6, every game patch added new options to the "additional" page which can change the game behavior. For more details see the Cheats page 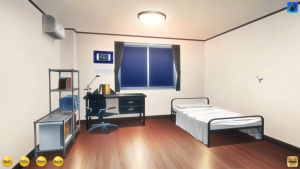 Here is where you begin and end every school day. You have the following options:

These buttons are present in every phase of the day:

The game doesn't automatically save. The only known way to save, is to wait for the school day to finish. At bedtime, the Save and Load buttons appear beside the exit buttons, and this is the only time a class state can be saved. Any unsaved progress will be lost on quitting the game. Loading a class will return to your bedroom at night, the same time and day that was last saved.

An example of a completely filled classroom. 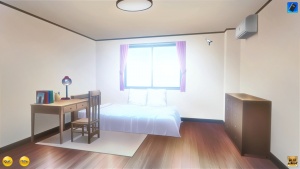 This displays a top-down diagram of the class seating arrangement; each box represents an empty desk, or the student who is seated there.

The player character is marked with the

icon, and can be changed only in the morning by selecting another student.

Buttons that appear beneath the desk arrangement (available only at bedtime):

- Customize the uniform, P.E. outfit, swimming clothes and club outfit for the selected student. You can also set a standard uniform for all students.

- Removes the student from the selected desk. The student will be removed from the class save file and all stats will then be lost. If the transferred character had a good favorability rating towards the PC then it will leave a farewell message

- Adds a student to the selected desk from a menu of students in Character Maker data. Transferring in a new character after the first day will have him introduce himself to the class.

It is important to understand that characters created with the Editor only funtion as a template in class creation: any changes made afterwards, both inside the Editor or to class members, has no effect on the other. Completely invisible to the player, the game also assigns a set of AI-behavior to the added classmates in order to prevent two or more characters of the same type acting the same, which would most likely happen when choosing several males, since there are only five types to select from.

Teacher position
Artificial Academy 2 has introduced the ability to play as or have an NPC act as a teacher. The teacher is whoever is chosen in the top middle spot of the class. Teachers are never tested on academic or athletic exams, though they may enter the club tournament. Teachers can gain stats in the same way as students by conducting the classes, lessons and club meetings. PC teachers lack the ability to study or exercise independently, but may do so with students one-on-one or in groups. A PC teacher's performance effects the student's development rates. Teachers will never fight.

Teachers have a general patrol of the school, from the staff room, up to the class room, then up to the roof and back down. They can easily be found in any of these areas. Teachers will never leave the school before every student leaves, including the PC.

Teachers can be fired from their job if they skip three classes or are caught engaging in sexual activity with a student.

The color of the mouse cursor indicates time remaining in the current period, changing from dark blue at the start of the period, through light blue, green, yellow, and orange to dark red at end of the period.

The lower right tile advances time to the next period of the day.

If two characters target each other for interaction then the first one will initiate its interaction when they meet.

Map Select - Opens the map to select a room to move to. The PC will automatically pass through any intervening room, (usually) selecting the shortest route.

Character Select - Opens the class roster to select a character to move to and interact with. Note that the selected character can be in a gender-restricted room. This is also where the "Load" button can always be found.

Game update v7 added the ability to set your PC to automatic play mode with the Z key. While in auto mode, your PC will act the same way NPCs act, with the frequency of the interaction determined by the PC's sociability. However, there will be no H in auto mode and you can't see the actions your PC takes part in.

The auto mode can only be turned on/off in your bedroom and during school you can't click any button except the chime one.

Since update v8 you can also determine whether the auto PC will interrupt the NPCs' interactions.

The Buddhist (Jizou) Statue is located behind the Martial Arts Dojo. Here, you can find out how everyone in the class views each other, as well as detailed information about everyone's stats.

This screen can also show you lover relationships between everyone in the class, indicated by a small

The second option the Jizou Statue gives you is viewing any character's personal stats.

The third option the Jizou Statue gives will show H stats for any two characters.

The last option the Jizou Statue gives are the Leaderboards, which shows everyone's Wisdom, Strength, and Popularity, and ranks them from highest to lowest. Each stat has a value from 0-999.

Wisdom: Randomly rolled from a range determined by the Intelligence stat set during character creation. This stat raises by doing well in homeroom, studying in the library, and any non-sport club (as well as the Other club).

Strength: Randomly rolled from a range determined by the Strength stat set during character creation. This stat raises by doing well in sports, exercising, and any sport club (as well as the Other club). Movement rate increases with higher Strength.

Popularity: This stat raises by talking to people and having good relationships with them. A higher Popularity rating means more people will come up and talk to you, and more people will join your group activities. A high popularity may cause others to spontaneously join your club.

Going to the class or home together, going on dates, accepting confessions and starting or accepting any

interaction will result in rumors about you spreading. Inevitably any lover will hear the rumor and may comment on it when you try to talk with them. This won't have any negative effects though. But if it hears a rumor that you had sex with someone else they will always confront you about it. You can deny the rumor and it won't have any negative effects although they may still mention them. If you admit that such a rumor is true then your lover will always get the Unforgivable! status. Note that if a lover hears a rumor about you and another NPC that is in a lover relationship with both then he/she will not be surprised or care about it.

Any of these can occur under special circumstances during the week, some recur regularly.

The PC getting killed

These will only be caused by NPCs with the Evil trait.
An Evil character will attempt to kill another character marked for death, indicated by a red Favorability status toward the target:

The murder can be postponed by selecting the evil character as PC and a character can be saved from being killed if Hate is reduced to minimum-range and either Like or Love increase above Hate.

When choosing to attack, the Evil NPC will have a different walking animation (which is also slower). When the murder happens the screen will flash red and a scream will be heard. After the attack, the day will end, and time forwarded to the next morning, skipping bed time and the opportunity to save or change class roster. Flowers will appear on the victim's desk in the class roster, and a pair of handcuffs will appear on the killer's desk. Both characters will become unavailable as PC or NPC.

A teacher will be forced to leave the school if it: 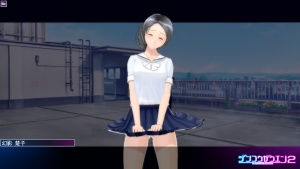 Gust Event. Note that this girl is wearing a skirt as P.E. outfit

Rarely, when you are outdoors (more exactly when you see light wind blowing a character's hair when talking) and a girl attempts to talk with you, a gust of wind may blow her skirt (if she's wearing one). Afterwards she will ask if you looked. If you admit it she will blush if she loves you, otherwise she will slap you.

NPCs playing with themselves 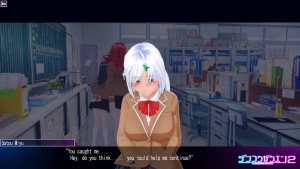 Every 2 weeks an exam is held on Saturday, and students will be graded according to their performance, which will be displayed in their Personal Stats. Club rankings are determined by the average Club Score of each member, so it is possible for a Club of 2 members to tie with or win against a Club of 20+ members. 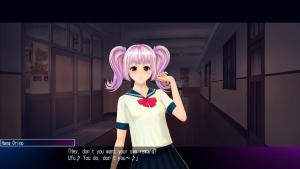 During the week prior to the exam/tournament, a girl with enough Like/Love toward yours may offer a Lewd Promise: H at their home if your grade is sufficient. If you accept, your status toward each other will fixed as Lewd Promise and that girl will refuse sex with you until after the exam. If you succeed, the offering girl may approach you any evening to invite you to their home. Girls with the Cuts Class / Wild trait may approach you anytime.

Requesting public sex will also expend the Promise, whether it's interrupted or not, as will taking the girl to a private room. Turning down a repayment invitation will cause depression in the offering character, but not annul their Promise.

If the offering character is High Virtue, or Normal Virtue but in a relationship or a virgin then they will refuse public H and private rooms so the invitation home is the only benefit you can get from the Promise.

Characters with the Wild trait and enough Like toward you can invite you to skip class with them in the Infirmary or on the Rooftop. In the Infirmary you will fall asleep together, and there's a random chance the other character will wake first and initiate sex. 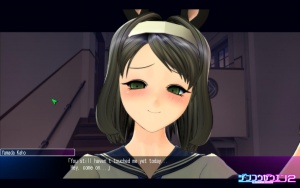 It is possible for a character with the "Evil" trait to approach your character and have sex with you without explicit warning or consent. Consent varies; you can agree to follow the character and, upon reaching the destination, they'll initiate the sex scene. Alternatively, a character with Low/Lowest virtue can approach the PC and instantly initiate a sex scene without any sort of prompt. This will only happen in the evening if you are lovers with the character and have not have sex with them for the entire day. Both situations are considered "normal" sex scenes (the Force Sex music does not play).

A low virtue NPC who is in the "Sadness" mood may ask you to comfort them through H if you're their sex-friend.

Murder The game will end if the PC is killed by a character with the "Evil" trait right after the NPC gives its last words.

Teacher termination If the teacher is the PC and gets fired the game will end.

Expulsion If the PC impregnated a girl but the girl no longer loves you then you will be expelled in the next Monday.

The only non-bad ending. You can get this ending by impregnating a girl and then maintaining a lover relationship with a high favorability rating. During the next Monday she will excitedly reveal this and the game will end.