How do they work

The success rate is influenced by traits, mood, character stats and favorability rating.

Note that a failed interaction will not necessarily decrease the NPC's opinion. A NPC can either directly refuse, decreasing their opinion on you, or can say "another time", leaving their opinion unchanged.

All lectures reduce the character's horniness to some extent. Success rate depends on the character's seriousness(virtue, teacher, related traits and mood) and is heavily influenced by the his/her current horniness. Teachers have a far higher success rate for these interactions.

Successful interactions have 4 different outcomes (bad, small, lively and deep) that are influenced by the character's mood, traits and sociability.

The first three conversations will always increase Like even if they fail.

Success rate largely depends on the sexual orientation and virtue of the NPC. Also, all of these will make the NPCs in the room react and spread rumors. If a lover witnesses any contact except "Caress" with a non-shared lover it will give them the Cheater! status. It should be noted that if a NPC hugs/kisses you without you being given a choice then jealousy will not occur. Unless you have enough favorability with the NPC, all of these interactions will make him/her angry if they fail.

Touch isn't necessary to initiate Sex, but it will help.

These interactions are 4 times more effective on lovers. 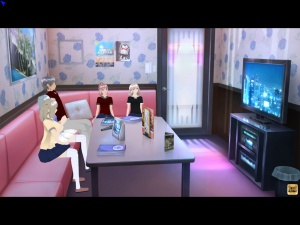 Located in the upper-right corner outside conversations, group hollers reach everyone in the room, except Gather around which can call characters in adjacent rooms to come to your room. The effectiveness of group interactions is based on their sociability, favorability and whether they have an action chosen already. Note that these will not change the mood and you can't lose favorability here.

When a NPC uses a holler that the PC hears, the PC will stop its action and be given a Yes/No prompt. 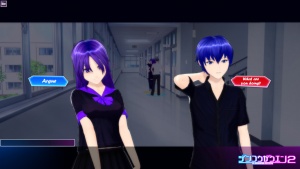 If the selected character has their feet circle colored yellow it means they're already interacting with one of the characters next to him/her. Attempting to interact with them will show both characters and two options.

NPCs may occasionally compete when interrupting if it dislikes the other character.

NPC competing for the PC

If a NPC interrupts you when talking with another character and attempts to compete for you, you will be given a prompt to choose one of the characters or you may simply say I don't know, angering only the competing character and to a lesser extent.

Another character may also compete for you when interrupting your H, in which case the H scene will continue with the chosen character.

PC competing for a NPC

If you chose to compete for a NPC that you interrupt (the one on the left) that NPC will pick between you and the other NPC based on its favorability rating with both of you. The NPC will refuse to choose if it loves both or neither of the characters (it will also offer different dialogue for each case). 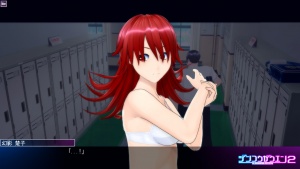 Aside from being able to do every interaction the PC does, NPCs can also initiate some specific interactions unavailable to the PC.