Once you have registered as a member of the Adventurers' Guild, VH-Hearts will allow you to continue when you lose (except on bad endings or in the arena). It is not clear when a Heart is consumed; this may depend on the quest, killer and death location.

This thread is dedicated to the location of all the VH-Hearts.

After asking the guard south of the train, you have the option to peek the most northern train at the window (the window will look different compared to other windows).

Now:-Peek twice, First option, then Second Option(Wait for the guards to leave).

If you choose the First option(Fight the guards), the items will be different: Rope,Train Medical Box(but it never appear in your inventory) and Pregnancy Booster(the 1000g one) and 500 Gold.

Note: You can trade this VH heart to a green-haired female jeweler on the train for some sort of dream option where you can choose Nanako's background which affects your traits somehow.

Note 2: Picking up all the items will cause Nanako to hide and skip the opportunity to trade the Heart to the jeweler. It will also cause the diary to become inaccessible regardless of whether you chose the violent or stealthy way; to reset, enter any map with monsters and re-enter Onsen Town.

-The Onsen Town Jail: After the onsen gangrape, you can complain to the guard at the most upperright door in Onsen town. You will be thrown into jail, the Heart is located here.

-The Onsen Town Inn: Inside the innkeepers room on the table by his bed. Go through the door on the right of the innkeeper, then walk behind him left until you enter his room.

- Also, during night time, head to the small bathing area opposite the stairs and pay the 5G to enter. When taking a bath there, there is a chance a sex maniac may storm inside and a fight will ensue. If you win, 'talk' to him and select the first option to release him. You will obtain a Heart in the process.

-The Onsen Town Bar: Left of the entrance of the bar where you can work as a waitress, in the small courtyard with the boxes there's a door you can't see on the right that leads into the bar area behind the counter, where you can find a heart.

-The Onsen Town Adventurer's Guild Hospital: The Heart here can be acquired by losing once (using up one Heart in the process) beforehand. When you either lose again or appear here later after the Thieves' Hideout quest boss battle, the door to the Heart becomes unlocked.

-Minotaur cave: Go west until you cross a bridge then head north. You'll reach a cave with 3 skulls outside. This is also the location of the minotaur extermination quest. In the Minotaur cave, if you follow the northern route you come to a cave with a chest, in front of the chest is a hole, drop into the hole. The Heart is among the slimes.

-Exit through the East Gate(use the dirt path, the gate is closed): Behind the first house you see, which is also the location of the babysitter quest there's a heart in the garden.

-Outpost Roof: Go north from Onsen Town, following the Thieves' Hideout quest route, until you reach a ruined house on the eastern side of the valley bridged by two bridges. Move to the collapsed entrance and hop up to the roof, then move towards the hole and jump down. Break the pots at the northwestern corner of the house to find some rope. Go to the gap at the southeast and 'use' it to place the rope. Take the southern path, go under the gap in the jail wall and down a hole with a rope already in place. From there take the southwestern exit to appear near a river. Hop down and head directly south past the fish and slimes into another cave. Follow the path until you reach a small cave area with two red bats and a snake. Take the southeastern path (there's a chest with a weapon right above the way leading to the map exit). Keep heading south until you reach a waterlogged area with an opening on the southern wall. Cross to the next area (it is the same area where the boss battle occurred) and head towards the northwest cave exit. Once outside, hop up and head eastwards. You'll be above the outpost; jump down, grab the Heart and leave using the trapdoor.

Beside the entrance to the Onsen Inn there is a path leading northwards. Follow it to find a Heart behind a guy spying the womens' bath.

Village of the Dead

Once you are able to get past the barrier blocking the gap in the northeastern wall of the northernmost house during the Rescue at the Valley of the Wyvern quest, head inside, take the north exit back outside and then enter through the entrance just slightly southeast of the well. Go past the next two rooms and then take the western exit. In the small courtyard with the crosses, head north back inside. Leave the room and head directly south. The Heart is on the large table inside the southernmost room. 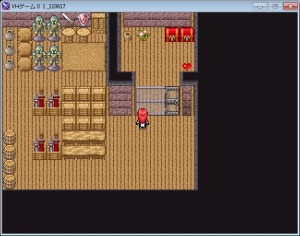 A heart in the below Guruhasuta shop.
-Under the Guruhasuta shop: Obtainable durring the visiting a son's grave quest, when you are asked to get flowers you can strip off your top revealing your breasts and talk to the vendor to the far right. He will give you the key to the basement where you can find the flowers, the VH heart and 1 Salve in each chest.

Note: You will lose the chance to get the flowers (and the Heart) from the bard vendor if you already have flowers from both the southwestern farmer and the nun, so be sure to deal with him before picking either of the latter two.

Demon King castle: After the new weapon quest you have to go save the daughter, talk to the ninja to go to the Demon King Castle. Once in, go straight to the left room. The Heart is at the far northwest side of the room.

During your escape after rescuing Bell in the New Weapon quest, just before you leave the castle (two maps south after the main hall you started the quest in) take the left path and up the stairs into a storage area with three orcs inside. On the ground at the northwest side is a Heart. 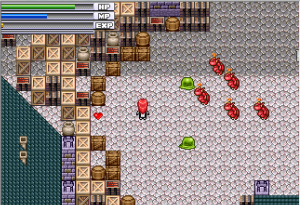 Heart in the alley battle map.
Alley: From the main street, take the southwestern exit. On the next map, head directly south until you reach an alley with a blue-haired man. Talking to him will initiate a fight. Fight him several times (have to leave the map and re-enter; the number of enemies seems to be random from 1-9) until you get into a battle against two men plus five red goblins and two slimes. The Heart is at the far western side of the battle map. 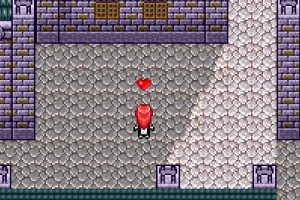 Heart in the murder alley.
-Murder Alley: The Heart can be found in the middle of the alley where you were sent to investigate the murder in the Finding the Murderer quest after completing it (unknown if there are any specific requirements).

-Capital Adventurer's Guild Hospital:The Heart can be acquired by going through the door behind Diggy (the capital guild manager) after achieving at least rank 15 in the local guild ranking. It is in the first room.

-Arena: Join as an Arena contestant and enter an arena battle. The Heart is on the ground at the northeastern part of the arena.

-Sewers: Found during the "After the Murder" quest when sneaking into the capital jail via the sewers.

-Rimun's shop: the VH heart is located behind the counter, but doesn't seem to be reachable.

Upon entering the Forest area with monsters (refer to Kojima's Thing Search quest to get there), find the western exit nearby which leads to a small, looping area. The Heart is on the eastern side of the lake.