The Disused Factory (廃工場) is an incomplete unranked difficulty dungeon in the Central Continent. It is unlocked by talking to an NPC in Ray-On Village inn at night. Most enemies here are relatively slow and not very aggressive, although they may be very damaging to low level characters. There are no traps. 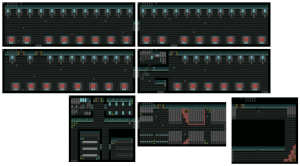 The initial area is safe and has a save point available in the Conference Room directly to your right. You will find a V1.0 keycard and battery while reading some old documents in a shelf in the Data Room opposite from the Conference Room. To venture deeper into the dungeon it is necessary to upgrade your keycard via computer terminals.

This floor is divided into several areas:

Attempting to exit the central area to the west or east will trigger the security system and cause the Phalanx robot to deploy. This robot cannot be destroyed, deals very heavy damage, and will relentlessly chase you across the level. If needed you can lock it in a room by luring it inside and using the nearby door console.

Note that once the Phalanx is deactivated more and newer monsters will infest the level, and the maid will move from the warehouse to the lounge. A slime representing the creator of the dungeon will appear in the warehouse to heal you and thank you for playing the dungeon as the rest of the levels are incomplete.