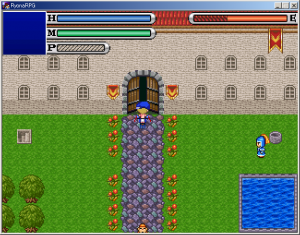 !!Make sure to save before this step!! 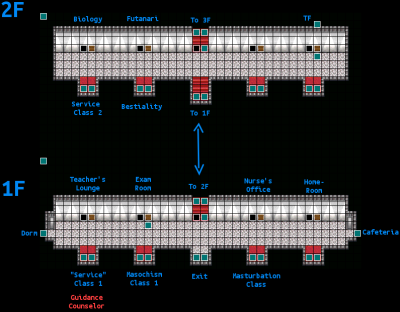 To the left is dorms.

To the right is cafeteria (unused?).

The four NPCS in homeroom:

At the top, elevator to Principal's office. Only available for graduation exam.

Available after taking the lilin rebirth class once.

You start with 0 points, though you get 1 point per caped man who caught you in Melbel.

Graduation exam is available starting from 75 points. Failing the exam drops your points to 74 no matter how much you had before. I recommend usage of Print Screen and Paint to clear the exam, but note that succeeding in it always seems to lead to game over. All of the following leads to the same dead end (Hypno's slave for eternity, or with 100+ points when completing graduation exam you get the option of becoming a teacher at the academy... then get raped by students and die):

If you don't do recruitment event and talk to warrior about Hypno (need to have read blonde's diary in dorms) and take Hypno's lecture, the warrior will kill him. Funnily enough, even though Hypno is dead you still end up as him slave if you graduate. Unfinished at core50?

Game overs which do no require graduation