These are useful tips given in homeroom after the morning period. Though many are obvious, the interpretation and applicability of some are open to more in-depth discussion.

Each school day has four time slots (parts of the day) that are counting down from the start of the day. At the end of the first time slot will find yourself in front of the classroom with all of the students. The timeslots are as follows: the first is a study session, then lunch, then exercise, then go home.

The game is made to make it difficult to go into an H-Scene if you don't know what you're doing. You need to read the girl (depending on her type and if she likes your character type) and predict what kind of conversation topics she would like. A example route is to begin the conversation with the following: 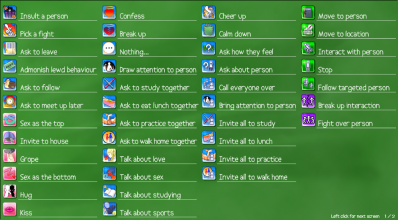 Command Actions Menu for the translated version of Artificial Academy.