Onsen Town is surrounded by a curtain wall, with gates in each cardinal direction. You are able to both go inside the wall and climb on top of it to travel around the perimeter of the city. 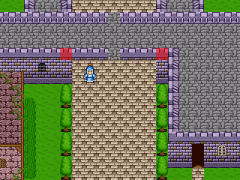 North Gate, with entrances to the Wall highlighted in red. 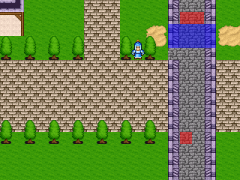 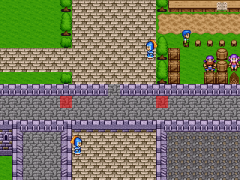 South Gate, with entrances to the Wall highlighted in red.

The South Gate was opened very recently; previously it was permanently locked. A little odd, since it appears to be the main gate, with what appear to be pretty beefy towers on either side.

The area to the south is currently very incomplete. At the moment, you'll just find a few screens of nothing-much. However, a signpost seems to indicate that this path will eventually take you to a town called Burukasa.

As with the other gates, there are doors that lead inside the Walls, and on top of the wall there is a gap in the battlement on the interior side.

West Gate, with entrances to the Wall highlighted in red.

You'll head out this gate to complete the Medicine Delivery and Minotaur Extermination quests. You'll also go out this way if you're on your way to Underground Town.

As mentioned above, it is possible to go inside the Wall by using entrances in each gate. Additionally, on top of the wall at each corner of town is a staircase leading inside. Finally, the interior can also be accessed from the dirt road next to the carriage shop that leads to the Horse Train station, because the station is essentially built into the wall.

By getting inside the northeast section of the Wall, you can get into the employee area of the City Guard headquarters.

Other than that, there is very little of interest in here.

There are exterior staircases at each corner of the city. You can use these to climb from ground level directly to the top of the wall.

The northeast and southwest staircases are accessible from town. Head for one of these for easy access to the area on top of the wall.

The staircase at the northwest corner of town is blocked off with a gate for some reason, but you can explore the area up there simply by using one of the other staircases and then running to the northwest side of top atop the wall.

On top of the Wall

Once on top of the wall, you can run around the entire perimeter of the city. There's nothing much up here, other than some guards to chat with on the south side and a merchant to the north, so it's more of a way to get places than a destination in itself.