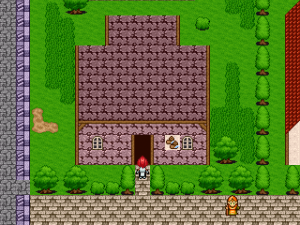 Outside the Adventurers' Guild

The Adventurers' Guild is located right on the main East-West road, next to the West Gate. Most of the game's content is centered around doing quests at the Adventurers' Guilds in various towns, so you'll probably be spending a lot of time here; in fact, joining the guild is probably a good first step upon arriving in town. You'll use the guild both to receive quests and to wrap them up: the last step is talking to the guild master to receive your reward. 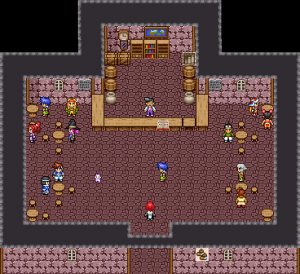 Inside the Adventurers' Guild

The most important person here is the guildmaster, who's standing behind the counter. The first time you speak with him, he'll ask if you want to join the guild. If you say yes, he'll ask for 50 G. If you choose to pay (and you actually have the cash), you receive your ID card (good at any guild!). Congrats, you are now the lowest-ranked member of the illustrious Adventurers' Guild.

Once you have a membership, you can do guild quests; see below for details.

If you're a guild member, this spiky-haired dude on the west side of the room will offer to join your party. That's all there is to it; you don't have to do anything more than ask, and he doesn't do anything more than help in combat. He's nothing special, just a melee fighter, but it doesn't hurt to have him around; do whatever you like.

Note that unlike most other companions, you can't change Hanten's equipped items. Don't bother to buy him anything at the store, because you can't make him use it.

* (not an accurate translation of her name)

This female warrior in the northeast corner of the room is always happy to keep you up-to-date with the latest gossip about which of the girls has just been impregnated by a minotaur. If you're visibly pregnant, she'll make you feel awful about it. Finally, if you have a kid, she'll show you a clearing in the forest where everyone in town comes to abandon unwanted newborns. Isn't that thoughtful of her?

Also, if you "die" in the vicinity of Onsen Town, you'll wake up in here... assuming you joined the guild first, you have a VH-Heart, and you weren't killed in some awful rape-you-to-death situation.

If you do meet those stringent requirements, you'll find yourself in the guild's basement, which I'm sure is a fully licensed and insured medical care facility. You'll lose one VH Heart and half your gold, but it could be worse (ask Debbie Downer how). It'll take several weeks (read: several dialogue boxes) before they let you go, but then you're as good as new.

As seen in the picture, you wake up in the bed all the way at the right; after your convalescence they'll set you loose to talk to the other whiners in the hospital and then exit via the top stairs. You'll pop out from the staircase behind the counter, where the guildmaster will promptly ask you to get your ass back on the customers' side. 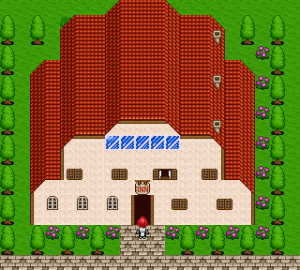 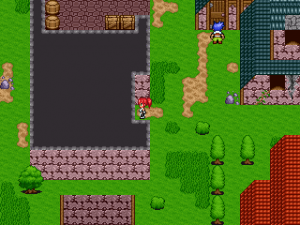 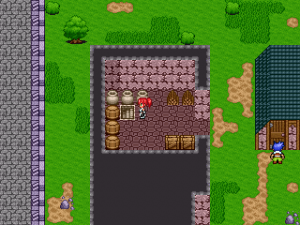 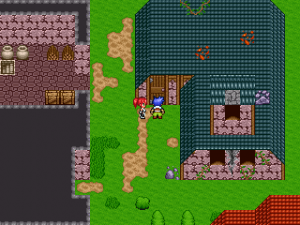 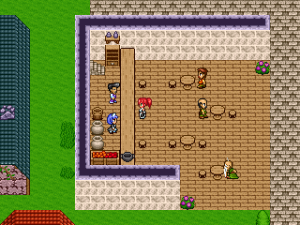 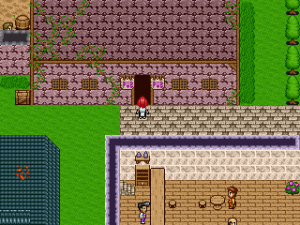