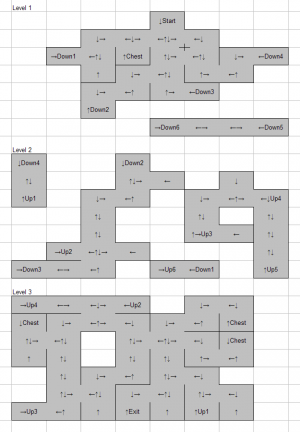 This tunnel consists of several deep chasms filled with randomly moving spirits. Green spirit flames occupy niches in the walls to the left and right. Four static hostile spirits will constantly fire spells from within the later chasms. You need to wait for the moving spirits to align so you can cross. Use a ranged weapon or the Chain Flail to hit the green flames, which will freeze the moving spirits and cause them to radiate a purple glow. For a short period (which is difficulty dependent) you will be able to use these glowing spirits to cross the chasms. Falling into the chasms will damage you and return you to the last solid ground you started from.

Falling into any of the chasms while at less than 10% Health will trigger a game over event.

You will meet the indulgent ruler of this place. After some exposition she will ask you to serve her. Picking the first option (accepting her offer) will kill you and make you her ghostly servant. The second option will have her attempt to persuade you but you must refuse again to have her give you the option of choosing your reward: two Soul Jar 16, a Prime Blue, or a Crystal Fragment. Afterwards she will kick you from her domain, dealing damage and booting you back to the world map. Note that this kick may kill you if you head straight to another dungeon.