When Saga loses in combat to a Yuusha, the girl will try to steal Saga's lifeforce in a H encounter. When Saga wins the battle Sefi will show a heart above her head on the map and he has the option to click on Sefi (purple crystal) for an encounter with her instead. This does not count as a move in the adventure map, which makes it a free choice. Most actions between Saga and one of the girls are the same, but there is one big differance between Sefi and the Yuusha: Saga cannot excite Sefi while she is in control.

Basically this is the H ability of Saga, Sefi and the Yuusha.

The Yuusha's will start at rank C, which means they are virgins and they cannot climax. With each H encounter they will gradually increase in rank. Higher ranks will allow BJ, 69 and Paizuri mode. The Yuusha will also require more of Saga's effort to climax at increased ranks.

When Saga is in control you can do the following with the mouse over the Action Field: 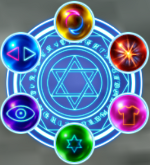 When in a H-scene you have the H Control on the bottom right.

When you mouse over Saga or the yuusha, the mouse cursor changes:

Purple Crystal (when over Saga)

The purple crystal appears when the mouse is over Saga's body.

Green Crystal (when over a girls limbs)

Hand mode (when over a girls head, breasts, etc.)

Note:Mauling the girls' butt or boobs can also raise the pink bar.

For best effect, you need to alternate between grinding, slow and fast thrusting, while keeping a close eye on the excitement meter left on the screen. If one action doesn't increase the girls bar, then IMMEDIATELY try another. Cycle between the three and always do what brings her the max possible pleasure.

By doing this carefully, you should - with a little practice - bring the girls to the big O. Using the scrollwheel of your mouse in the action field will automatically repeat the last action; you can control speed by scrolling up and down.

A better alternative: Try left-clicking on the action field, which will thrust once and then wait until she has reached the top of the thrust animation. When she starts thrusting back at you, left click again and you will fall into a kind of natural rhythm. To maintain the rhythm you have to left click at that same time every thrust. It takes a little practice to get the timing right (exact timing makes a big difference), but it does seem to be a bit of an "I win" button with the ladies.

Sometimes neither grinding nor thrusting seem to have any effect on her arousal. Try switching positions if this happens.

When Saga is in control, basic position changes are made with a middle click within the action field: Missionary to doggy, cowgirl to reverse cowgirl etc. You can right click and drag within the action field to vary the current position: Missionary to kissing missionary and so on. You can then reposition Saga (purple crystal) to get all kinds of positions, like reverse cowgirl to standing doggy to kneeling doggy to raised from behind etc. etc..

Note that the girls will continue in the current position if she gains control, so to e.g. have a reverse cowgirl with her in control, you should change to that position and then transfer control (or wait for her to take it, with the risk that she swaps to her prefered position). As long as Saga manages to fill her excitement meter within a certain short time (ca. 1-3 sec. depending on his Eros skill) the girl will not take over the initiative.

Finally, you can click the Toggle Insertion Mode button to change insertion mode. The yuusha will randomly choose between BJ, 69 and paizuri*.

These are some of the available positions depending on who is in control and the Eros level of the girls:

*): Only some girls do paizuri. Eclair, Enis and Viara has not been found to do paizuri.

This unverified technique to raise Eros was posted:

Super orgasm is when the girl climaxes very loudly with the tongue out. She will remain in this state for the rest of the H encounter. It has a tendency to initiate during the end-stage of their second orgasm. The only requirement is to give the girl two orgasms in a row.

To remove Saga's clothes during H-scenes you basically got to switch and let the girl take the lead. Depending on her mood, she will sometimes remove Saga's clothes. Removing the girls clothes first seems to increase the chances she will do this, but her Eros skill is a more important factor, since removing clothes is a spell she needs to know.

To get the special scene, you have to do the following:

- if the little picture is orange and Saga hesitantly says aishiteru back, That scene can be gotten by making Sefi orgasm 3 times regularly. SSJ3 is the power up to beat the final powered up gilgamesh correct? It is a nice additional scene, but it is not required to finish the final boss.

press C while mouse over action square = same as middle-click when Saga's in control, make the girl turn around

Below each climax meter on the top left, there is a pentagram and a heart.