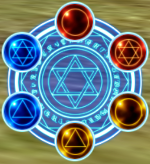 When in combat you have the combat control dial (see picture) in the bottom left of the screen.

These are the default settings which can be recalled in the pose editor, but also altered there in any way. Especially changing the fourth in a more powerfull magic attack (pentagram) is worth the trouble. As an easy reminder in game: the vulnerabilty is counter-clockwise.

There are three types of attacks:

To hit an enemy, you must attack faster than enemy. Any attack initiated during enemy attack period will count as counter and will most likely to miss. So you can use a quick attack to gain initiative, but light attacks are less effective since they do little damage and are less reliable. Better is to start a slow attack right after the enemy attacked. The enemy will most likely counter and miss, consuming AP in the process.

Both Saga and the yuusha can have the initiative three times in a row at max, but the third one will always miss. After these the initiative will always go to the opponent. This also means that, after two quick attacks from the yuusha, Saga has the time-window to start a slow, powerful attack without any risk of interruption.

Any enemy without MP will only be able to do physical (Red) and mind (Blue) attack, where only the physical attacks can damage your HP. So, a valid tactic (but not always the right one) is to use heavy magic attacks to drain MP. Then she will only be able to damage you by using physical attack and you have a defensive bonus while using magic attacks. Even after your MP is out, you will have no weakness as the yuusha still cannot use magic attack, and if she uses the mind (Blue) attack you will be unaffected (yeah, the AI is not too smart!).

Standing still will increase you chance of blocking. Counter-attacking leaves you less vulnerable to their attacks.

It seems the safest way is to repeatedly hit them with fast attacks such as the default top one. Spamming that move worked well except against the large amazon who uses blue (magic?) attacks often. Having a full green bar allows you to block red (physical?) attacks and since short moves such as default top take so little green (stamina?) it regenerates quickly to block the physical spamming heroines.

For those who have trouble winning the fights, there's a cheap little trick:
Just wait for them to attack you with a hp attack and do nothing. You will most likely block the attack. Then counter with a fast hp attack (red circle button). Most of the time, the girl will then attack you again with an attack that you can dodge if you do nothing. Repeat. Win. Be liked by Sefi. Win again.
Works 90% of the time.

In the pose designer there are a total 9 pose slots available.

First position of each pose slot (1, 4, 7) will determine the name, effect and power of technique created. Some will also affect by second position.

Note: The best type of attack may not necessary acquire filling all nine pose slots. If you set a pose to all slots you will get a heavy attack and more animation, but definitely not the most powerful one.

Each pose that you design will get combat attributes based on the complexity of the pose. The attributes go from C (worst), to S (best). They are:

The combination of pose attributes and the attack type (light, medium or heavy) will determine the overall attributes of your attack. These are shown when you save/load the attack.

Single best preset pose is number 4 and 26 which give the rank B, B, B respectively. Put rank BBB pose in position 1 and 7, else in blank will give you the rank SSS, AP18 heavy attack. But using these preset move will give a very weird animation, so its better create your own Rank BBB pose. After you have created your best move, save it and and import to an attack button.

If you don't have the English translated interface (for some reason), this section may help.

Refer to the image. 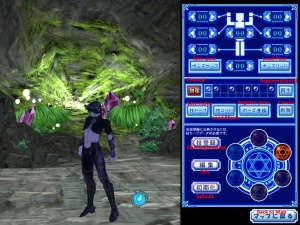 Lepist is a Gilgamesh armor wearing creature that you have to defeat to win the game. Lepist's shadow may appear in various places. It is not possible to initiate combat with Lepist until all of Saga's stats are at rank S, after which it will wait at Danka Ruins. If Saga loses a rank to any of the yuusha, Lepist will disappear.

When you beat Lepist s/he will incarnate in a new, even more dangerous form. Lepist will do this three times and then it will turn into a "Super Saiyajin" and whoop Saga's ass.

Below are various assorted tips that will help you beat Lepist. There are probably more ways to do it, so please edit this if you find any.

When you have defeated Lepist three times it will turn into a "Super Saiyajin" and defeat Saga. But then Sefi steps in and makes that "level up noise" she likes to make and then she turns Saga into a SUPER SAIYAJIN LEVEL 3 Saga!

Then Saga basically just mop the floor with Lepist with an ultimate attack that does 99.999 damage.

How to get SSJ3

It is not known exactly what is needed. Here are some unverified findings: