When the Heroine has no weak points, or an opening from 3-point attack, and the Hero has at least 10 Penis, you can use the extra space in your ballbag to fill with Seed or point bonuses. Anything placed there will remain until an Ejaculation round, even if ending other rounds with an Ejaculation. This is a good way to retain bonus yaku and Will Barriers when attempting multiple ejaculations.

Ejaculation: When hovering over the Ejaculation button, the score added after Ejaculation will be displayed. The green (illegible-style) tiles indicate bonus yaku from the Hero's (Crystal Gazer in this case) Meatstick. The red yaku tiles are the Heroine's score. Ejaculation can also add Seed from the Hero's Meatstick. This will not interfere with any combos or LOS effect. If the Heroine's Just Fit combos are deficient in a Seed, a Hero with that Seed in his Meatstick could supply it. The earlier it is in his Meatstick, the less Power required to access it. 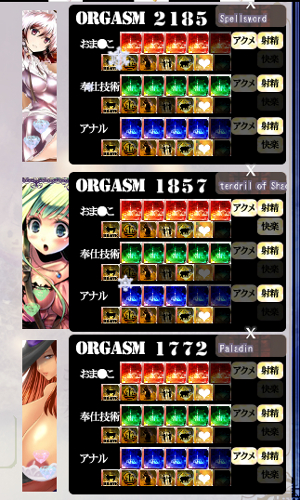 3. LOS Effect: Up to three red, green, or blue jewels may be displayed in the lower half of a Heroine's portrait. Achieving these increases abilities in ways not reflected in Power Lv, and multiple jewels of the same type have cumulative effect. [Sources are oblique on the actual effect, but all agree on their significance.] There are six types, depending on the effective total Seed Combos in each zone:

Courage: The greater the disparity in ability between two, the more aggressive the one with the upper hand will be. A challenger with more Courage can face an opponent on equal footing. To the player this means the opponent AI's difficulty is reduced. To the Hero it may mean that their own AI aggressiveness is increased. Either way, this helps equalize the ability between differing ability levels.

Harmony: This represents how well the Hero uses the space around him. The more cards present on the field, the more informed strategic choices the player can make. The maximum starting field is 12, but higher relative difficulty can reduce this. More Harmony equalizes the difference by restoring those cards to the field.

Power: This represents how well the Hero uses the means at hand (depending on context, this could be weapon or penis.) The more cards in hand, the more potential yaku can be collected, and the choice to KoiKoi or fold is more frequent. The maximum starting hand is 8, but like field, hand can be reduced with relative difficulty. More Power corrects this reduction against higher difficulty opponents.

Wisdom: This represents attacks of opportunity at the beginning of an encounter, and is used in Combat only. Each point of this grants a guaranteed point of damage at the beginning of the round. For combat-oriented characters this shouldn't be a significant source of damage, though +5 over the course of 9 attacks certainly adds up. Support characters need every edge they can get to survive combats at the difficulty levels that front line characters should be able to face.

Magic: This determines the amount of initial Pow the Hero has to perform special attacks. Whether this is set per encounter or once at the start of a March is uncertain. No maximum is stated in the manual, but it may be safe to presume 10 since that's the max Pow the Hero can start with in Quests.

Life: Pretty self-explanatory; much like Life is to the player in Quests and Seeding, this is the measure of a Hero's durability.

Attack: During Ejaculation Phases, Attack # of dice are rolled, and any that exceed the Heroine's Defense (4 - Love Level) are added to total bonus points. Every roll of 6 adds 10 points instead. Attack can be increased by as many Seeds as you can fit in the ballbag.

Reload: For each point of Reload, a roll of 6 adds an extra Attack die. Reload can only increase 1 per Seed modifier added, to a maximum of 4. Each additional Seed with +Reloaded is added to Attack instead.

Crit: For each point of Crit, a roll of 4 or more doubles the points. For a 6, this is a total of 20. Crit can only increase 1 per Seed modifier added, to a maximum of 3. Each additional Seed with +Crit is added to Attack instead.

This is a summary list of the attributes important to Seeding and Milking. More detail is in Heroine and Hero Classes.

Seed Combos: These combos will grant the 'Just Fit' bonus in Penetration and Ejaculation. Each directly corresponds with the classes listed to the right. The colors will determine the colors of gems created when guardian demons are captured.

Shadow Heroes can be used to substitute for any of the main Heroes. See the complete list of Hero Classes for their attributes.