Without the [Stability] effect, combining Elements can be a complex alchemy with unforeseeable and irrational results. However, you may be able to create more powerful swords for certain classes (ie; Crystal Gazer, Shinobi) by attempting to inject Seed by using these tables. You could also use this system to summon specific Shadow Heroes, in case you find the tables provided for that too complex.

Each of these are rewarded with an additional book to store items.

Anything you can equip and move between inventory and storage. Found as rewards in Quest Mode Hunt/Search/Combat, or at the end of Marches.

Under most conditions, drops are guaranteed: Meat Animals will be earned from successful Hunts, Items will be discovered in successful Searches, and Gifts of Deyla will always appear after capturing 5 or more Seed in a round. The quality of these drops depend on several random factors.

Fortune increases the chance that any given card will yield a treasure chest, but only if captured. The bottom is never increased, so the chances get much rangier, and you always have the chance of poor rolls (especially with a bad RNG seed.)

These Finds are totaled at the end of all rounds, so it may benefit you to extend a game rather than finish quickly, and bonus Find from items (and possibly other sources,) are added. There still isn't a lower limit, as the total is then randomly rolled against itself, and that will be the final Find. This diminishes the results towards the average, with the worst possibility ever present.

In Serious Seeding, the rewards are both immediate and long term; the arrival of spectators increases Mana and the chances of Dark Spirit offerings, and when creating a sword, total Finds during the Seeding session are a determining factor in many of the Hero's final stats.

If you have a trade.sav file, Finds at the end of Marches are simpler. At ~65 Difficulty and above, a random slot is selected from the Merchant's store; if the store is full, you'll always get an item.

Anything that can be sacrificed. Only found on Hunts, except for Rabbits, which can be found as Gifts of Deyla and at the end of Marches.

Just like in Haro (and Nethack,) scrolls remain cryptic until identified or used, and any can be positive or negative effect. Fortunately you only have to learn each scroll's use once per save slot in order to identify them again. Your knowledge of scrolls will remain throughout all Quests and in between.

Amnesia3: don't believe this appears in the game, but need confirmation 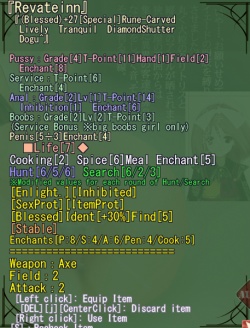 Charms, talismans, amulets, trinkets and other unlikely items most prized for the benefits of their properties when equipped. If unidentified, all of these properties will be hidden, and even the name may reflect the holder's lack of familiarity with the item.