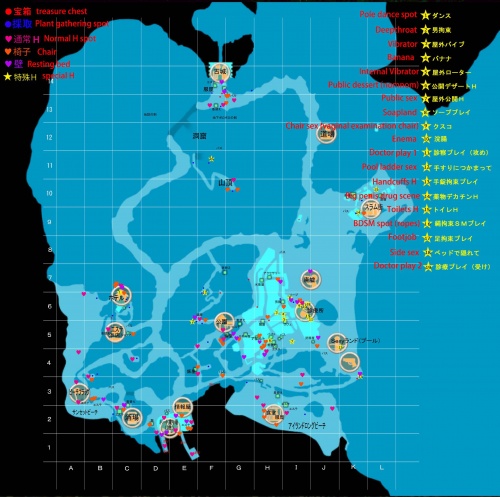 Step 1. Get your Hotel Pumped up

Step 2. Get your shit together

These descriptions refer to the default controls settings.

Although the in-game menus only allow customizing joystick controls, you can edit the SexyBeachPR/UserData/Config/Key.xml file and set additional keys or mouse buttons using the codes listed in http://docs.unity3d.com/ScriptReference/KeyCode.html

Controls that do not have a keyboard default: 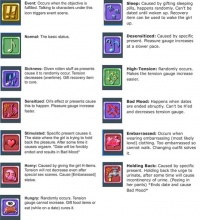 Winning at minigames awards the player points that cam be spent at Sexy Land Water Park, for novelty items, clothing and weapons, and more valuable prizes that can be converted to the island's currency. The games feature Makoto, Sexy Land's idol, who can also be won with enough points. Winning points and games is also required to satisfy Akane's conditions.

This game is a water shooting gallery located on the second floor of Sexy Land. Win or Loss is never declared, but shooting down Makoto is noted high on the score card, and earns 200P. She's the only moving target, so you must chase and keep firing until her top falls off, then continue hitting her until she falls to the floor. If she's running, she will fall to her knees, if she's standing still or turning she will fall on her butt, giving a better view of her chest.

2 Bonus Points are earned for each dolphin mascots shot. Many of these mill together in knots, making it easy to strafe them, but others will drift up and down in patterns. Strafing dolphins on an even plane is much quicker than trying to target them in the air, so learning their patterns and coming back to them when they're at the floor will help maximize points.

This game can be played while on a date, but the date will not participate.

This game is a short foot race located on Sunset Beach, at the southwest corner of the island. To win, simply click rapidly to make your character sprint to the flag to capture it. The prize is 100 points.

If played while on a date, the date will run the race, and her ability will vary from the player character's. If the girl wins, she may enter a High-Tension State.

[needs confirmation: Is ability based on personality? Akane and Tsundere moved quickly, but Nagisa and Kana were much slower. State may also affect performance, as Tsundere ran more slowly while Sick.]

Each hostile NPC killed will yield points like the minigames.

Maybe this should be organized into an expanded Sexy Land section or article.

All of Sexy Land's items sell out, and the highest value items sell out after only 1 purchase. The maximum P per day that you can convert to G is 875P, for a maximum of 4280G per day.

Not all of these have an efficient exchange rate, so whether it's more valuable to spend all your P or wait until the next day for a better deal depends on the rate at which you're earning P.

On the budget end: if you're only earning the P in order to make quick G from it. You can make 500P quickly (and safely) from 2 games of Sexy Shooter each morning. This is assuming a minimum of 250P per game; if you focus on shooting Matoko down (200P), then shooting 25 dolphins before the clock times out is trivially easy. The more practiced you get at this the more P you'll make, but not by a significant amount.

500P buys a Gold Bar and a Rare Sexy Crab, which you can sell right back for a cool 2500G. These have an exchange efficiency of 1:5 (5G gained per 1P spent.) If you want to maximize the value of your P and minimize the time you spend earning it, then you may wish to conserve remaining P for the next day.

The Gem and Power Potions are decent trades, at 1:6.5 and 1:6 exchange ratios. Sexy Snacks net 1:4 in exchange, a cheap payout for a cheap cost. Ores have the absolute worst rate, netting only 0.6G per P spent.

On the surplus end: if you're clearing hordes of thugs as a matter of course, gaining P faster than you can spend it all and already own one of every toy sold. You may as well cash in all your P in for G; rinse and repeat.

Time is divided into distinct and important periods:

If you nap (whether voluntarily or not) during any period, you will wake at the beginning of next period. [Note: you regain the same amount of stamina regardless of how long the nap is.]

At the beginning of each period:

It's especially important to be aware of the time in many circumstances. If you're racing to reach an encounter, if you're in an area you know to spawn thugs, if you have a buff item to take and wish to maximize its duration, or if you're low on stamina and restoration items and don't wish to lose whole hours sleeping.