Since Sexy Beach 3 is a Japanese game that won't install or run correctly on non-Japanese versions of Windows, you will need to alter some settings. There are several ways to do so:

The game should be installed into English folders such as "Sexy Beach 3" (instead of the default "Sexyビーチ3") so that you won't run into a bunch of possible headaches in the future. Install Sexy Beach 3 first, followed by Sexy Beach 3 Plus, then Sexy Beach 3 Gravure, and finally the two small addons Flash and Santa Suit.

When you have successfully installed the game you'll probably want to install the English translations and UI and a fixed launcher. The easiest way to install them all is through the HF Patch.

If you still have problems after using this guide check out TheShadow's very in-depth guide on how to install Sexy Beach 3 and its addons. It goes over the same topics and much more.

Users with ATI HD 2400/2600/2900 will have some major graphic glitch that all the girl character's swimsuit cannot be shown properly. However the latest Catalyst 7.11 driver seems to fix the problem but still sometimes might have some mesh/object missing. For example, the hands and sun oil liquids, restarting the game seems to fix this temporary.

Related Link to this issue: [1]

Example Image of the issue above: 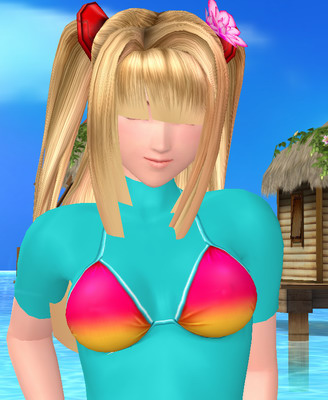 Tweak Fix: Turning off the Fog Effect in the option setting before starting the game may fix the missing objects (Hands and liquids). Tested with catalyst 8.4 Hotfix Driver.