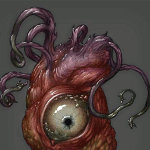 A fiend encountered in combat

A Fiend is a creature found in the fogs surrounding Eternal Rome. Their most discernable feature is their countless tentacles, used to attack their soon-to-be victims.

They appear to sustain themselves solely via sexual interaction with women.

While patrolling the Border of Fogs the player may encounter one of three types of fiend.

To begin raising a fiend, slavers must first rent a Fiend Pen from the Real Estate office in White Town's Trade district.

Next, the slaver must aquire a slave impregnated with a Fiend via these methods:

Within a few days the fiend will eat it's way out of the unfortunate slave, killing her. From then, the fiend requires daily "milking" to be handled by a slave.

It is recommended to train your assistant in Fiend Mating to minimize the amount of time it takes to raise the fiend, and ensure it does not wither to death from lack of sexual fulfillment.

After some time the fiend will evolve and gain a new title; Larvae/Rear Gripper, Dark Juvenile, Tentacle Beast, Kraken & Leviathan. Each stage will also net some units of alchemical mucus.

Once a Leviathan is acquired, it can be traded to Master Valios at the central forum for the Raven Crown, an artifact that grants permanent Auspex and a boost to aura.