Although some of the values go from 0% to 100%, Hentaijin's English Launchers allow you to input them manually in the corresponding field box, allowing numbers greater than 100% and negative numbers as well. You could, for instance, make her waist -20% and her bust 110%. Note that you can only put 3 characters, so -99 and 999 are the max values. Other than Personalities and Traits, the only values that affect gameplay is Breast Size. Tit job only happens when the girl has Breast Size equal to or more than 50% (30% with the expansion).

In character creation mode, you may start from a fresh copy, load from a girl file saved on your hard drive, or load up one of the pre-made girls. 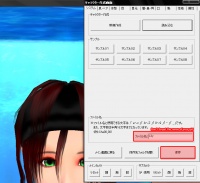 the right button to save
.

By using the same family name for different girls you can make them related to each other, although the only relationship available is as siblings (sisters). It is possible to make a girl related to the player, although - again - the only relationship possible is as siblings (brother-sister). However, this requires the "blood related" trait; this value (family name) has no bearing. This is because the player does not enter a family name for himself.

According to some experimental testimonials, girls with the same family name and the Sister Fixation trait (シスコン) are more likely to hang out together.

It is currently unknown if the zodiac determined by the birthday has any influence on the girl's behavior, or if the birthday serves any purpose at all.

If the current day in real life is equal to the day you stated as your (male) character's birthday, girls may serve a birthday cake at the table. Conjecturally, this might also happen on any real day which coincides with a girl's birthday - there is anecdotal evidence for this.

For brevity, this table only lists the original Japanese name, pronunciation, and a quick translation of the meaning. For actual in-game effects, see the traits article.